Please subscribe to the main blog to receive any future posts. Thank you!

Posted by Jen-Marie @ Catholic Inspired at 12:29 PM No comments:

A biography of St. Therese (and a Kindle bargain)

Note: In celebration of the feast of St. Therese on Wednesday, October 1, the Kindle version of Trusting God with St. Therese is only $.99 until 8 AM Pacific Thursday. This may be the only time I run such a sale, so it’s a great opportunity to pick up a copy if you haven’t already.

St. Therese of Lisieux is one of the most popular saints in history. Almost immediately after her death, her little way of spiritual childhood began to spread. She was canonized less than thirty later and named a Doctor of the Church by Pope John Paul II.

Marie-François-Therese Martin was born in Alençon, France in 1873. Her parents were Louis Martin and Marie-Azelie Guerin Martin. She was the youngest of their nine children, four of whom died before age six. Louis and Zelie were committed Catholics. They were standouts even in the Catholic subculture that had grown up in the larger, anti-Catholic culture of their place and time. Both had considered religious life before they met and married. Zelie was a successful businesswoman. Louis eventually sold his business to help with hers.

Therese was a talkative, happy, but spoiled child. She had a strong will, but everyone loved her.  When Therese was four,  Zelie was diagnosed with incurable breast cancer. She died before the year was over.  “My happy disposition completely changed after Mama’s death,” Therese later wrote in her autobiography, Story of a Soul. She became shy and extremely sensitive.

Continue reading at Contemplative Homeschool.
Posted by Connie Rossini at 7:04 AM No comments: 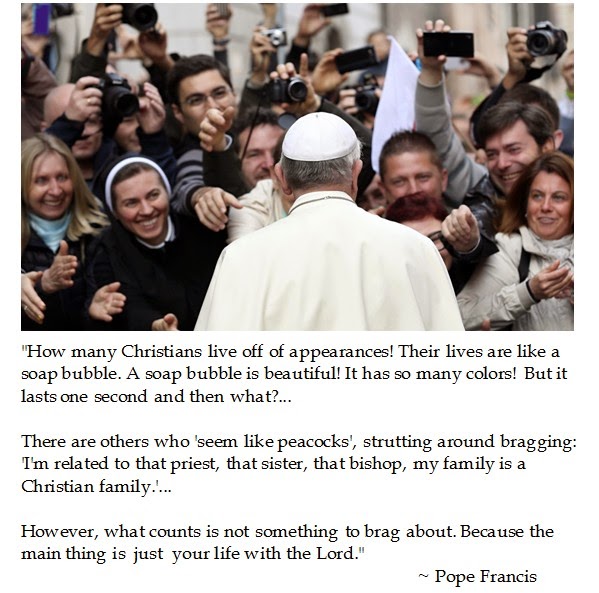 Pope Francis used his homily during the morning Mass at the Casa Santa Marta to warn Christians against vanity when practicing the faith.  The Holy Father keyed off of the scriptural reading from the Book of Ecclesiastes to dwell upon vanity, which the pontiff illustrated through several examples of living to be seen.

Pope Francis emulated the inspiration for his regnal name by railing against doctors of the law who stroll around the square wearing luxurious attire like princes.  This certainly sounds like words that could be uttered by St. Francis Assisi.

Pope Francis pastorally inspired homilies used tangible metaphors, like soap bubbles and onions, to drive home his point against vanity.  But the Holy Father supplemented these symbols with the rich history of the Church.

“The Egyptian Fathers of the desert said that vanity is a temptation against which we must battle our whole life, because it always comes back to take the truth away from us. And in order to understand this they said: It’s like an onion. You take it, and begin to peel it – the onion – and you peel away vanity today, a little bit tomorrow, and your whole life your peeling away vanity in order to overcome it. And at the end you are pleased: I removed the vanity, I peeled the onion, but the odor remains with you on your hand. Let us ask the Lord for the grace to not be vain, to be true, with the truth of reality and of the Gospel.”


The answer from the Holy Father is humility, prayer leading to acts of charity.

Posted by DC Calamity at 6:52 AM No comments:

True Contemplation and its Counterfeit

Normally the word contemplation is used to describe the mystical awareness of God's action in a person, working through the Holy Spirit as they are being gradually transformed into the image and likeness of Christ. It begins not when we so choose, but when he chooses. Although we can prepare for it, it is essentially God's gift. To begin with it is often called 'obscure contemplation', or 'the prayer of faith' or a 'ray of darkness'. This is because at first, the action of the Holy Spirit only highlights all that separates us from the transformation into Christ that he is working to achieve. The 'ray of darkness' suddenly becomes a 'ray of light' when God chooses, giving the believer ever deeper experiences of the presence of God within, as the journey into Christ deepens. read more...
Posted by David Torkington at 3:01 PM No comments:

Should we sit quietly during prayer?

Last week I wrote about St. Teresa’s of Avila’s method of mental prayer. Today I want to discuss misunderstandings about prayer from a different angle. Since we desire contemplation, should we sit still in prayer and wait for it? Should we try to make it happen by quieting our minds? Like last Friday’s post, this series speaks to the differences between Carmelite teaching and Centering Prayer, yoga, and other types of meditation influenced by eastern religions.

Some people falsely equate silence with supernatural (infused) contemplation. They read about the need for interior silence in prayer, and they mistakenly think that if they sit quietly, God will necessarily bestow contemplation upon them. They equate the peace they find in silence to communion with God.

The Vatican has cautioned us about certain methods of prayer

In 1989, Cardinal Joseph Ratzinger (later Pope Benedict XVI), as head of the Congregation for the Doctrine of the Faith, wrote Letter to the Bishops of the Catholic Church on Some Aspects of Christian Meditation. Here is what the document says about silence:


Similar methods of meditation, on the other hand, including those which have their starting-point in the words and deeds of Jesus, try as far as possible to put aside everything that is worldly, sense perceptible or conceptually limited. It is thus an attempt to ascend to or immerse oneself in the sphere of the divine, which, as such, is neither terrestrial, sense-perceptible nor capable of conceptualization.” (11)


Continue reading at Contemplative Homeschool.
Posted by Connie Rossini at 7:09 AM No comments:

Last winter on social media, I came across another Catholic author who was promoting yoga. Not as an exercise program, but for spiritual growth. I was shocked. I asked her why she wasn’t promoting prayer instead. She answered, “Meditation is prayer!”

Two months ago, my brother forwarded an email from a colleague, asking about Centering Prayer. A friend was pushing it relentlessly. I looked at the website of the Catholic group that promotes Centering Prayer and found this in the FAQs:


This form of prayer was first practiced and taught by the Desert Fathers of Egypt … the Carmelites St. Teresa of Avila, St. John of the Cross and St. Therese of Lisieux…

The other day a new reader asked in the comments about meditating on Sacred Scripture. “Is this the same as the method of Fr. John Main, who has adapted an Eastern mantra method for Christian meditation?”

I have written a little on this topic before, but I think it’s time to revisit it. Let’s start with Teresa of Avila.

Suffering. Ever since the Fall of Adam, it’s an unavoidable part of life. We suffer daily in little ways. The alarm clock rings too early. We spill coffee all over our work clothes. The kids are disobedient. We get stuck in traffic. These little things are a reminder that all is not right with the world. Something is out of whack. We have lost the close connection with God we were meant to have.

When we face small trials, we have an opportunity to grow in trust and love.  We can offer our disappointments and dislikes to God in love, asking Him to use them to bring others to Him. We can say, “Jesus, I trust in you,” praying that He helps us to accept His sovereignty over our day. Because after all, we were never meant to be in charge of our life. These gentle reminders of that fact can help us reorient ourselves towards God. (As an aside, I am experiencing a little annoyance right now from my kids. Thank you, Lord, for this opportunity to put into practice what I am preaching!)

Every day on FaceBook, someone asks me for prayers. Sometimes, a loved one is seriously ill. Other times, a FaceBook friend faces clinical depression. Prayers for difficult pregnancies and comfort while burying infants or dealing with miscarriage are common.

How should a Christian face tragic suffering?

Posted by Connie Rossini at 7:08 AM No comments: