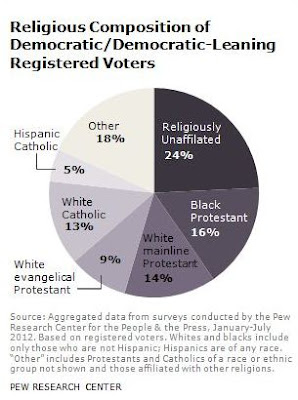 This Pew Research Poll highlights several interesting facets of the Democrat coalition.  Less than 6 in 10 Democrats seem to belong to belong to Christian Churches.  When the White Evangelical sliver is factored out, less than half of Democrats self-identify as traditional main-line Protestants and Catholics. Amongst people that Pew surveyed, just 29% thought that Democrats were more friendly towards religion. This reaction may have reflected the  vehement reaction among Democrat delegates against inclusion of the last minute face saving God and Jerusalem plank in the party platform in Charlotte.


Another remarkable feature is the size of the “Nones”.

READ MORE at DC-Laus-Deo.US
Posted by DC Calamity at 11:18 AM No comments:


Fifty years ago today, Pope John XXIII opened the Second Vatican Council (1962-1965).  It surprised many that this “caretaker” papacy would launch such a sweeping endeavor as Vatican II.  In fact, Pope Blessed John XIII died on third of the way into the conclave, but he believed that the Roman Catholic Church required aggiornamento or “updating”.

Having been born towards the conclusion on Vatican II, I have no personal recollections of the way the Church was prior to Vatican II.  My cursory knowledge as a child caused me to conclude that Vatican II translated the mass into the local languages (vernacular) and stopped the use of High Altars with priests back to the congregation. I was aware of people who were put off by the Novus Ordo liturgy and longed for the Tridentine  rituals, but that just seemed like an old translation.  It was only when I started to study Vatican II that I had a better appreciation for the fruits of the council and how strongly disappointment from the right and the left remain today.

Over three years, some 2800 bishops from 116 countries met, debated (in Latin) and produced 16 documents.  Instead of automatically taking the preparation work from a cautious curia, the Council regrouped in geographical zones and requested a thorough re-thinking of the Council’s agenda.  But regional politics was serendipitously curtailed by seating, which was by seniority rather than delegations.

Unlike other councils, Vatican II did not define any dogma or pronounce anything anathematic.  The documents used word of persuasion and inclusion, like People of God or “brothers and sisters” rather than top down neo-scholastic theological statements.

While keeping true to the essence of the Church in scripture, holy tradition and the Magisterium, Vatican II renewed the vision of what it means to be Church.

READ MORE at DC-LausDeo.US
Posted by DC Calamity at 5:18 PM No comments:

Based on a true event in the Mexican history books in 1926 to June 1929.  It was the struggle of the Mexican Catholics for religious freedom, drastically taken away with force by the Mexican government.  A movement called Cristeros, rose up to defy the anti-religious strictures of the Mexican regime.   "Viva Cristo Rey!"  meaning "Long Live Christ the King" was the battle cry of the members of this movement.


Three years of battle against the heavy-handed government filled with brutality and oppression against the Catholic Church and her members in Mexico.  The violence in this movie depicts this cruelty, including the torture of the 14 year old boy.

Three priests and 10 laymen, including a 14 year old boy, Jose Sanchez del Rio, were beatified in 2005, join a growing list of 20th-century Mexicans recognized by the Church, including the 25 martyrs beatified by Pope John Paul II during his trip to Mexico in 2000.

This movie, as violent and intense as it was, should make every American, rather every human being, stop and appreciate the freedoms we have to move about and enter any religious building and worship as we see fit.  It also should make every human being take a step back and ponder how cruel we are to each other beyond reason, beyond human, beyond comprehension!  How horrific we have been to each other throughout our history starting with Cain and Abel.  Is there a way we can stop this madness?  Is there a way we can come to our senses and learn to love, to do to others as we would have them do to us?

My prayer tonight and every night from this day forward will be for peace, agape love for our neighbor.  That we treat each other as we would want to be treated.  That punishments fit the crime, but love tenders the punishment.  I know that there will never be a utopia as long as we are human with a free will, but
basic rights of worship should be one of those things that are called untouchable by anyone, including the governments of countries. Those who are centered around their God are more centered people, that is good for society, good for each other, and possibly leading to being peaceful people.
Posted by Ebeth at 4:59 AM No comments: